This salad…is amazing!  I had a version of it while on vacation in Indy earlier this month.  Artisan lettuce (no iceberg) with fresh strawberries, mandarin oranges, pecans, crumbled/cubed cheese, and grilled chicken.  Delicious!

Salads are wonderful for a variety of things…you can get seriously creative with them.  Fruits, nuts, cheeses, meats, etc.  Nothing is really “wrong” on a salad…with the exception of dressing.  Some people go crazy with dressing, and drown the flavor (and health value) out of a perfectly good salad.

I have been experimenting with creating everyday food items from scratch.  First up…vinaigrette.  Specifically the vinaigrette that accompanied this salad in Indy.  A poppyseed vinaigrette.  The waitress was nice enough to tell me it had these things included:

She followed it up with, “It’s really quite simple to mix up.”  So, I did.  I did; however, switch up the sugar for honey (as noted by the *).  I used two different kinds of oil, olive and canola.  The dressing had a pink hue to it, so I figured she probably meant red wine vinegar.  Putting this dressing together took me all of five minutes…and it is delicious!  Best of all, I know *exactly* what is in it, and I know it is fresh!

What kinds of salads do you enjoy?  Have you ever made your own dressing?

This looks amazing, too.  Another recipe courtesy of my Facebook friend, Amy, that is on my “must try soon” list. 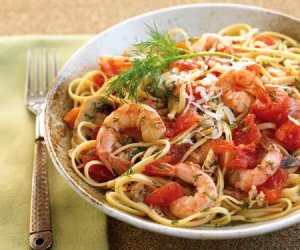 This is another recipe from my Facebook friend, Amy…and another I want to try.  Although I am not a big fan of clams, so I would probably substitute chicken instead.  I think it would still be equally delicious with chicken anyway.

Alternate:
If you blanch your tomatoes, their skins will slip off easily. Begin by coring the tomatoes with a paring knife, removing the stems and white middles. Then cut an X in the bottom of each tomato, cutting only the skin. Bring a pot of water to a boil and add the tomatoes to the water. Boil for about 30 seconds. Remove the tomatoes from the pot and immediately plunge them into ice water to stop the cooking process. when the tomatoes are cool enough to handle, use the edge of the knife to slip off the skin.

Directions
1. Warm the oil in a large saucepan over medium-high heat. When it’s hot, add the clams, shrimp, and mushrooms. Cook, stirring occasionally, for about 5 minutes, or until the shrimp are pink and the mushrooms are soft. Add the tomatoes, garlic, and dill. Reduce the heat to low and simmer for about 10 minutes, or until the juice from the tomatoes evaporates a bit. Season to taste with the salt and pepper. 2. Meanwhile, in a large pot, cook the linguine according to package directions. Drain the pasta and place it in a large bowl. Add the shellfish mixture and toss gently to combine. Sprinkle with the cheese and additional dill, if using, and serve.

I came across this recipe today looking over a friend’s Facebook page…and it looks *amazing* to me!  I want to try this out sometime in the upcoming week.  I *love* fresh cilantro (so much, in fact, I grow it in my garden).

1. In a large bowl, combine vinaigrette, beans, cumin, and salt and pepper to taste; set aside.
2. Heat a nonstick skillet over medium-high heat. Add corn and pan-roast, stirring occasionally, until lightly browned, about 4 minutes. Remove from heat and let cool. Stir corn and remaining ingredients into black bean mixture and toss together.
3. Chill until ready to serve. Divide evenly into four salad bowls.

TIP: If you use frozen corn kernels, make sure they’re thawed and dry so they don’t stick to the pan. 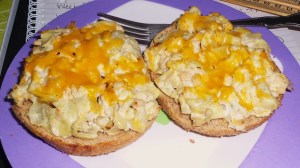 2. Place on a baking sheet.  Broil 4-6 inches from heat for 3 to 5 minutes or until heated through.  Sprinkle with remaining cheese; broil 1 to 2 minutes longer or until cheese is melted.

****I would decrease the lemon-pepper seasoning if I made this again.  It was a little too much for my taste.  Other than that, this was fantastic.  Also I used 100% whole grain bagels instead of English muffins and it was just as yummy.

These burgers are delicious (and much healthier than regular burgers).  What a perfect way to enjoy a BBQ with friends and family.

1. In a large bowl, combine the turkey, shallots, soy sauce, ketchup, garlic, and pepper.  Blend in the cheese, then form into 4 burgers.

My chicklets love mac-and-cheese, so it is a must in our house.  Of course, I would now substitute whole grain pasta for the regular stuff in this recipe.  That would likely change the nutritional info at the bottom slightly (in the best possible way, no doubt).

1. Cook the macaroni according to the package directions; drain and return to the pot.

2. Add the milk, cheddar, Monterey Jack, American cheese, mozzarella, and pepper.  Cook over low heat, stirring constantly, until the cheeses melt, about 5 minutes.  Serve sprinkled with nutmeg and a side of minted, steamed green beans.

Here’s the dirt on this recipe:
6 servings (about 1 cup)

I prefer to have quick lunches because our days are usually busy.  In the past this led to me eating something very unhealthy just because it was quick.  Now, I am starting to make tomorrow’s lunch today, which takes away that excuse.  This is a recipe I have tried, and I truly enjoy.

Combine all ingredients in a small bowl and chill.

*Try this on a bun with lettuce and tomato (and I usually add a piece of swiss cheese because I just love it).

Here’s the dirt on this recipe (these facts include lettuce, tomato, and bun without cheese):
2 servings